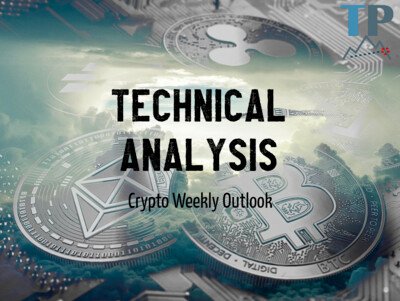 Ethereum (ETHUSD) powered higher this past week, following a similar pattern to the beginning of last year’s major first half rally. Significantly, ETHUSD surge has been fueled by a decisive break of the June to December 2019 downtrend resistance line (on the daily chart), arguably completing its major bottoming effort. As shorts continue getting squeezed, odds are elevated for a test of the psychologically key 200 whole figure level before month’s end. ETHUSD’s major trend reversal has been further reinforced by Bitcoin (BTCUSD)'s clear break this past week of its 6 month plus downtrend resistance. The weekly and daily RSI, Stochastics and MACD are bottomish, rallying or consolidating recent gains. Note that the two spikes lower (on the daily chart) in April 2019 are specific to the Liquid ETHUSD market, due to insufficient liquidity, marketmaker and circuitbreaker support (specifically on this exchange market) and not a spike move down on ETHUSD (across other exchange markets). 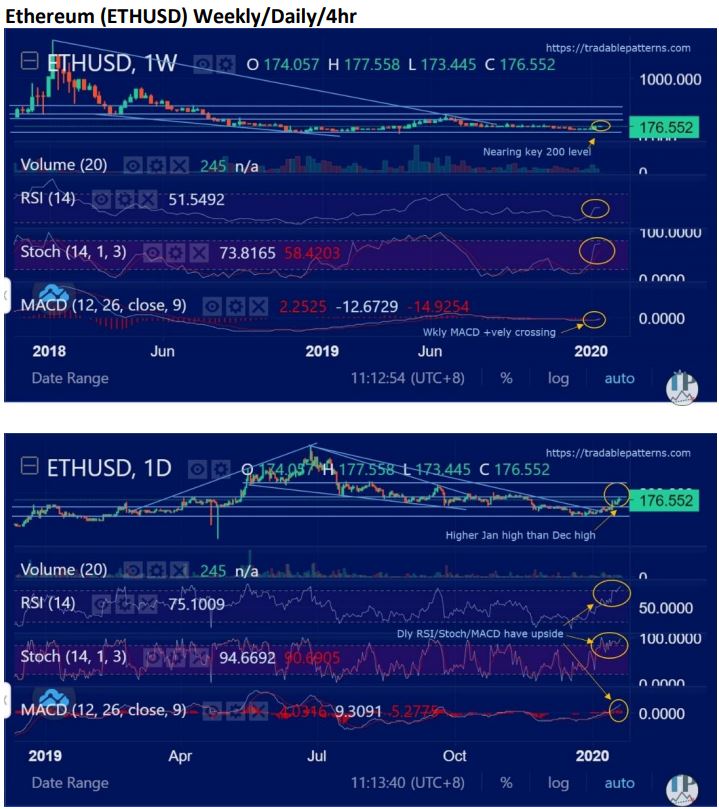 The Ethereum hard fork Muir Glacier completed January 2nd, 2020, addressing the “Ice Age difficulty bomb” ahead of a fork planned for Q2 2020 named Berlin. Muir Glacier occurred just 3 weeks after Ethereum’s Dec 8th hard fork Istanbul, which introduced privacy improvements and altered gas pricing. Ethereum Version 2.0 follows Berlin, moving Ethereum from the Proof of Work algorithm for validating transactions to Proof of Stake, making transactions faster and cheaper (and eliminating the need for ETH mining and bringing the barriers to system validation to those with a laptop). Other 2020 scheduled improvements including scalability improvements from Sharding and possibly Layer 2 solutions like Plasma and Raiden, along with quantum computing compatible/secure network elements and network redundancy. Meanwhile, Ethereum developers have their work cut out for them as debate rages among developers and miners on mining difficulty and incentives, while newer blockchain competitors built for greater scalability attract more developers and funding. Although Ethereum is often portrayed as being highly decentralized, it should be remembered that Ethereum’s network is increasingly vulnerable as more than 60% of its nodes are now hosted within cloud networks like Amazon’s AWS, Google Cloud and Alibaba Cloud. Any decision by these Big Techs to push a competing cryptocurrency/blockchain could sideline these Ethereum nodes.

LedgerX and ErisX continue preparing to launch physically delivered Ethereum futures, with the CME appearing to be laying the ground work to follow suit, as it finetunes its Ethereum reference rate and index.

Tencent announced just before Xmas that it is forming a cryptocurrency research unit, likely assisting with the China digital Renminbi coin launch. Tencent-operated WeChat Pay has a 40% market share in China’s mobile payments industry, and 900 million users globally as of 2017 (with the majority in China as WeChat Pay is available only in a few countries outside of China).

Click here to read the rest of the Industry Fundamentals, along with technical and fundamental analysis of Bitcoin and Ripple.