The economic consequences of Russia’s invasion of Ukraine have been panned out by economic warfare led from the US-Europe alliance, mainly with commodities as the battleground. During the month, the metals complex price action was exacerbated by the overall tightness of the supply market and the lack of overall inventory to buffer the crisis. The embargo created accelerated moves on the upside accentuated by the demand for increased margin due to volatility on market participants who were short (typically commodity producers). Thereafter, the squeeze also accelerated the unwinding of long positions (roughly when the market moved back down as over-leveraged long positions were called for margin). The uncertainty on the extent of the embargo as well as the possibility of conflict escalation in Europe has triggered a huge inflow in gold moving the market to above 2,050, followed by a 1.3Bn USD bearish flow when the war stabilized into a standstill and following hawkish rhetoric (for raising rates) from Chair Jerome Powell (gold ended up only 2.6% in March with huge intra month volatility and an overall increase of ETF flows putting upward pressure in the market). On base metals, producers who had hedged and didn’t have the cash for the margin calls were short-squeezed to unwind their hedge, moving the price even higher. LME (now HKEX owned) suspended trading of the nickel contract for nearly a week in order to avoid default of one of the biggest Chinese producers holding a huge short position (nickel traded above 80,000 intraday, an increase of price of nearly 400% in a few days, before it was unwound).

The imposition of new US and EU sanctions first excluded the energy sector though there was a race to find alternative oil supplies. The potential replacement of 4.5 mb/d of crude and 2.7 mb/d of distillate products would be a massive undertaking. Besides, OPEC+ ministers kept quotas unchanged for April at 400kb/d at their shortest meeting ever (13 minutes). Spot Russian Ural crude dried up after European refiners began replacing supplies with North Sea alternatives (Ural’s discount to Brent fell to -30USD/bbl). The price reversal was very brutal on the petroleum complex, accelerated by higher margin requirements in a crowded long position, lock downs in China slowing expected demand and the announcement from the US to release a 1 mb/d from their SPR reserves for 6 months. US natural gas received a boost from the working agreement to ensure a supply of American LNG and hydrogen to EU member states. Biden administration is now acting to foster US production, expedite approval of pipelines, storage and export facilities. The European gas market had a negative month after the extreme level it reached since the beginning of the war, prices nearly tripled in March before getting back to levels close to before the invasion. The flow of gas from Russia has been kept constant and even almost increased.

The wheat complex also experienced one of the most volatile months ever with the market moving quickly up at first, wheat reached an all time high of 1,425 cents/bu on 7th March. Ukraine’s entire agricultural industry seemed paralyzed with the spring crop planting to be highly disrupted. Ukraine is the world’s fifth-largest exporter of wheat (11.5% of global exports according to USDA). March was one of the months with the most limits up and down. The de-escalation of the war and the ability of Ukraine to still export some of its crop allowed the market to slightly correct back and finished the month 8.5% up. 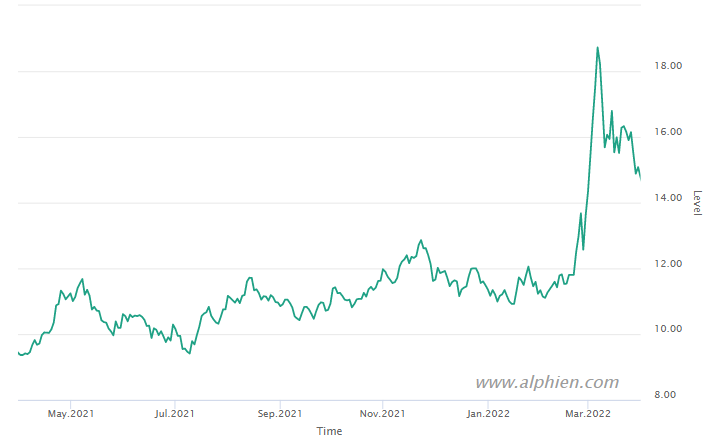 March was also a very volatile month for volatility, with concerns over the Ukraine war and inflation taking turns in rising and fading, and the situation seems to continue. Although almost unchanged on the month (up from 17% to 18%), implied volatility for gold peaked at 30%, a level not seen since March 2020, though back then it briefly broke above 50%. With sanctions hitting crude supply hard, implied volatility for crude briefly broke over 100%, once again a level not seen since the peak of the Covid panic back in March 2020, where it even broke 300%. It came off significantly since though, as the US government stepped up to control prices, and ended the month at 63%. Equity markets were very volatile as well, especially in Europe, with the VSTOXX touching 50% early in the month, a level only seen in March 2020, the European debt crisis, the GFC and Dot.com bubble burst. The VSTOXX is now back down to around 30% but this level remains significant.