The Fed pivot towards easing monetary policy should be in sight as recession looms. In the second half of July, markets moved sharply in the direction consistent with a shift towards pricing an easier monetary policy, Powell’s comments signaling the possibility of a downshift in the pace of rate hikes, lower wage pressure and lower inflation with a resilient US economy have all contributed to a return to risky assets. The expected increase in real rates has been negative for gold but retraced back as the pivot was priced in (the possibility of lower rates is supportive for gold). Whether central banks focus on inflation or on growth support, it will likely affect gold price. The balancing act is perceived differently by the ECB where growth and the efforts of war put inflation on the back burner (thus the weak EUR last month). Base metals are strengthening on the back of the rebound in the equity market but the prospect of global growth slowing down continues to weigh on certain metals (Copper -18% YTD).

On the energy complex, the retracement by approximately 25% since June is perceived to be triggered by large outflow in the complex and destocking while fundamentals remain constructive to higher prices (https://www.iea.org/reports/oil-market-report-august-2022). The pricing by participants of a slower growth (as it has historically been) is not taking into account the post-covid re-alignment of demand, high cost of natural gas (incentivising certain emerging countries to use oil for power) and the risk of supply disruptions due to the war in Ukraine (and European sanctions to be implemented by the end of the year). Slower global growth may indeed swing the supply and demand equilibrium, but aggravated destocking leaves less cushion and has usually implied high volatility (with the risk clearly on the upside). As the seasonal winter effect comes, higher energy prices may also stress inflation barometers that will affect growth and monetary policy. US Henry Hub Gas continues to be affected by European demand building up its reserves; following the 30% down correction in June (from 9 to 5.5 mmBtu), the contract came back up in July to above 9, an unprecedented volatility due to renewed fears of Russian gas being blocked (caused by Nord Stream contested technical issue).

Speculation about the inability of Ukraine to harvest and export its grain had made the entire grain complex (due to its partial substitution) go to record levels. Old crops (mainly old stocks from the previous harvest) had been slowly getting their way through different routes to the Danube. Ukraine wheat production for this year’s harvest is expected to be 41% lower than last year, a much better outcome than expected. The shipments of grains from Ukraine after the UN brokered agreement to let ships from Odessa go through the black sea has been taken as a strong sign of release by the market. Wheat and other grains have now come back to pre-war levels (Chicago wheat is up 5% YTD) and the situation in Ukraine is not expected to have a huge consequence in the grain market for the time being given that harvests in other exporting countries have been overall good. 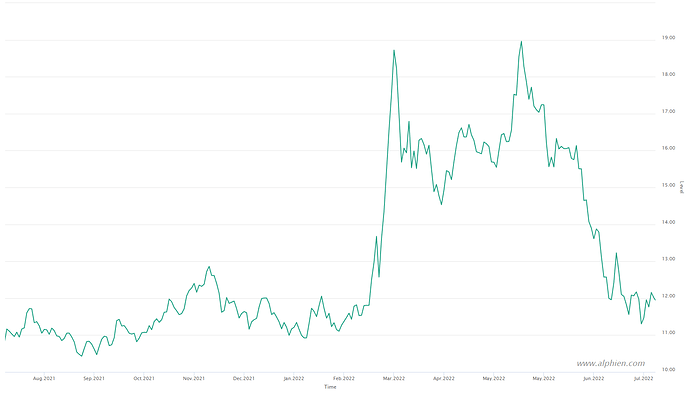 Volatility in the equity sector was down in July, in line with the pivot, with both VIX and VSTOXX down from high 20s to low 20s, as market sentiment has appreciably improved. This is due in part to encouraging data throughout the month with strong job numbers, strong retail sales and a mixed earnings season (as opposed to an expected negative earning season). There is also a moderation in inflation expectations with commodity prices now significantly lower than earlier this year and the Fed’s reactivity. Despite a somewhat volatile month (with no clear direction) for most commodities, their implied volatilities are barely up, and even down a few points for crude. It seems that after the recent uptrend and correction of commodity prices, the market is now anticipating a range bound market going forward, explaining this meager appetite for hedging.